NIGERIAN MUSIC: MY 21 YEARS AND ITS MANY GENERATIONS

The past 21 years have redefined what should be recognized as the typical Nigerian music. Before then, genres like fuji, juju, highlife, reggae were most popular with great artistes like Kollington Ayinla, Ayinde Barrister, Sir Shina Peters, Ras Kimono, Majek Fashek, Oliver de Coque, Bright Chimezie holding sway.

Afrobeat was a genre which had Fela Anikulapo-kuti as its main life line and it wasn’t until Abami Eda passed away that we started seeing the likes of Dede Mabiaku who was already an established and fantastic concert performer coming on TV alongside many other one-off artistes that sprang up in the late 90s, majority of whom tried to sound like Fela, but it didn’t work out for most of them simply because “ko le werk”.

Even Femi Kuti despite being Fela’s son was able to earn a unique identity which stood him out internationally and that was at the period when Nigeria was experiencing some kind of metamorphosis in our music industry. 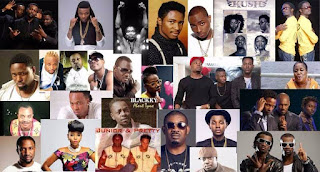 Looking from 1995, while the likes of Femi Kuti and some few others were gradually getting noticed in Europe for staying glued to their African identity with the infusion of Pop/Hip-hop tones and sounds, Nigeria was struggling with our pop culture back home and we couldn’t even define properly what our hip-hop music should sound like.

Although we have had the likes of Junior and Pretty, Mike Okri, Blacky, Esse Agesse, Alex O, Alex Zitto etc. who bridged the gap between Highlife, Pop and Hip-hop, we still wanted more, thinking we should actually rap like Busta Rhymes. Then came my generation, the mid/late 90s generation, the generation of “say what, say what”! “Hey yo, DJ, track 2”! We claim to have introduced “real” hip-hop to Nigerian music and in all fairness and with due respect to those great guys whom we rocked some stages together then, especially around 1998 to 2001, they paved the way for today’s industry.

There’s a nostalgic feeling I get whenever I remember the likes of Ruff, Rugged & Raw, Def O’Clan from which Azadus emerged, the North based SWAT Root where we had great rappers like 6-foot-plus, X-Appeal made up of Jazzman and Lexy-Doo, then of course the Trybesmen and my brothers, Maintain to mention a few. Those days, nobody knew Nigerians could sound so good on R&B until we heard Plantashun Boiz “Knock me off” and “Don’t U Know”. Remedies made Yoruba language sweet to the ears with great hits like “Shakomo” and “Judile” and they were the first group to make it big in that era. They remained big even after the breakout of Tony Tetuila who went on to make his own equally big hits.

One problem however remained with us for a long time and this was the inability of most of our hip-hop artistes of that time to compose 100% original tunes of their own. Ghanaian music was getting recognized for identifying their own style which they called Hip-life but we just wanted a bit of everything, sometimes contradicting ourselves on if there should be anything called Afro hip-hop.

Most Nigerian artistes then rather depended on placing their songs on foreign beats especially popular American hits; they also thrived on writing indigenous lyrics using the tunes of these popular foreign superstars. It seemed the faster route to public acceptability or commercial success so almost everyone was guilty, except myself and my twinbrother (then known as Twinax) and few others. The group Maintain seemed the most criticized of all, perhaps because they failed to embrace originality even till mid 2000s when others were already doing outstanding productions out of self-belief and pressure from the media and of course as demanded by a more aware music audience who were quick to compare our standards with that of Ghana and South-Africa.  Thanks partly to the efforts of great music producers and record labels of that time, like the late OJB, Nelson Brown, Paul Dairo, Cobhams and so on, we gradually started to sound original.

One thing remained obvious though, our new found hip-hop industry had great potential and everyone could see that the future of Nigerian music depended on it, but the lack of originality in our music bred bigger challenges for our industry then, which included non-exportability; even the Nigerian media played more of American Hip-hop than Naija Hip-hop or Afro hip-hop for that matter.

Our videos were worse because, as much as we tried to match the foreign standard and pretended like we were “getting it” in our audio productions, there was no hiding place for visuals and we just couldn’t manage to get it right in terms of technical quality due to the level of skills and resources available those days. Compare Nigerian with South African and Ghanaian videos and we were way behind, but some things stood us out, we had the better talents, we were more flamboyant and we always had the biggest market.

So, even the South-African music station Channel-O had no choice but to find their way into our market by playing our musical videos, though they claimed to be very selective with our works which is partially true.

Fast forward to 2015/2016, and then look back again to 1995, you’ll realize those 21 years represent a period of total transformation of our music industry from the American wannabes to the leading light of the African industry. Thanks to the coming of media organizations that raised the standards especially MTV Base, not forgetting SoundCity, the first local music TV channels to refuse airing sub-standard music videos.

One tangible way of seeing how far we have come is through the quality of our musical videos which today rank among the best in Africa, so much that we now dominate continental music video awards. But within those 21 years, Nigerian artistes and video directors or producers have gone through thick and thin giving us some moments of excitement which I think deserve to be remembered for the impact they had in their various era.

The big bucks is here now, indigenous records labels now rent offices in Victoria Island and our artistes can afford to fly to any country in the world for suitable locations and casts. Almost everyone can rent a chopper or yacht and hire professional models for his music video, but are those props the main attraction for our videos?

In the era when we couldn’t afford all these luxuries, how did we keep Nigerians entertained through our videos? We shot on VHS, DV Cameras with just a few skilled personnel available, but we depended solely on CREATIVITY in order to compete.

Having experienced it all through the years, I decided to come up with a chart to pick out my top 21 videos of 1995-2016, putting into consideration that there existed many eras within those 21 years in view.

As a recording artiste who has competed in the same industry, some may want to doubt my objectivity or question my right to such an opinion which publicly criticizes the works of “my colleagues”, but that’s if you are not aware or ignore the fact that I’ve been privileged to experience the Nigerian entertainment industry both as a major player and as an observer who has spent the last 6-7 years of my career doing other businesses outside being a musician.

I may have been a stakeholder, we may have rubbed shoulders with the best in the business, but these recent years of focusing on my modest career in management consulting and living a quiet life as a family man have given me the opportunity to see things from the fans perspective and not as a competitor. The truth remains that I still qualify as a great fan of Nigerian music, I enjoy good music and I’ve got massive love for everyone and utmost respect especially for those artistes who have remained active and consistent all through those years.

While some have come and gone, it’s great achievement for the likes of Sound Sultan and Tu-face Idibia, who continue to wax stronger since the 90s, holding their own in a very competitive industry. The likes of P-Square, D’banj and the evergreen Don-Jazzy came afterwards and they’ve remained consistent as well. KC-Presh I remember won the maiden edition of Star Quest in 2002 and I think KC especially deserves some kudos for staying strong in the business.

Of course not without challenges of their own, these artistes are good examples of perseverance and persistence.

And the new school? I think the likes of Ruggedman, Mode-9, Eedris Abdulkareem should be proud of the next generation of rap artistes they were able to inspire, with MI, Ice-Prince and others currently leading the way. I hope Lord of Ajasa is also proud of Olamide, Lil-kesh and co. May Da-grin’s soul continue to rest in peace. I don’t speak Igbo but I imagine how Nigga Raw feels listening to Phyno, nothing but love I believe. Wizkid and Davido’s followership reminds me of the brief rivalry that existed between the fans of Faze and Tu-face shortly after the breakup of P-Boiz.

Interesting industry no doubt! Very fascinating and I’ve got fond memories too numerous to write about, but please go check out my chart in an article titled “My Top 21 Most Outstanding Naija Music Videos in 21 Years” (1995-2016).

I hope y’all will like it and agree with some, if not all of the views shared in it.

Tywo Akintoye
With a rich and successful background in creative artistry which started in the early 90s as a ‘choir boy’, then professionally later in the late 90s as a member of the then popular Afro-Hip-hop music group Twin-X which he formed along with Keni his twin brother, Tywo has been a well-respected musician and a passionate follower of the African entertainment industry. He has a B.Sc. in Economics. He spent his post university years in Advertising, then later Management Consulting, with skills in Business Development & Brand support, offering solutions in various industries including Telecom, Media, Entertainment, and Tourism He holds an MBA Marketing Management, an Executive Masters’ in Project Management and a Project Management Professional training from the International Institute of Technology and Applications, (IITA) Georgia, USA. Besides his management consulting and music career, Tywo is actively involved in music as a chorister in his Anglican church, where he performs classical music pieces and hymns on a weekly basis. He co-founded O'range Development Consult.